Project Muddin’ is an early 1999 Ford F250 4×4 equipped with the fabled 7.3L Powerstroke Diesel engine. When I purchased this truck, it had only one owner, was 2 years old and was completely stock except for a bug guard and toolbox. Like any new truck owner, I started thinking about the goal for the truck and what modifications I could do to improve upon the factory options. Looking back, there are things I would have done differently that would have saved me a lot of time and money on various stages of the build. But that’s how you learn right? Hindsight is always 20/20 and this build became the very cornerstone of Miry Clay Offroad. 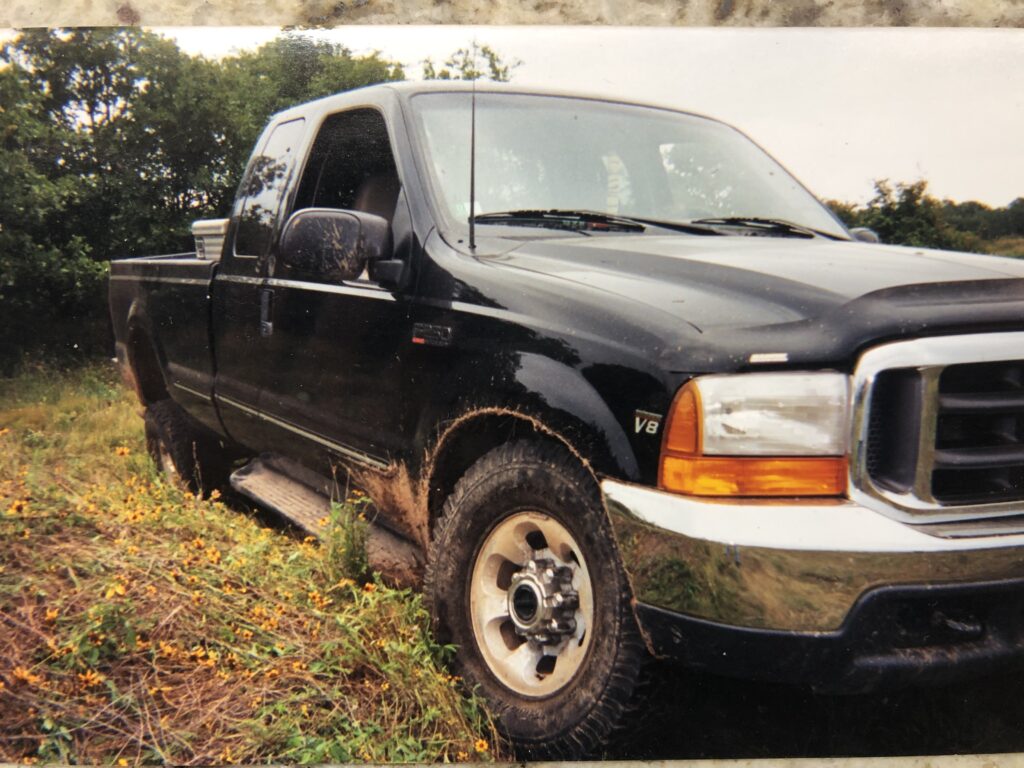 The first thing to go was the factory suspension, tires and wheels. As soon as I could, I did a 5.5” Fabtech suspension all spring lift on a set of 36”x14.50”R16.5” Parnelli Jones dirt grips wrapped around a set of Eagle Alloy wheels. This setup worked well but there was a little tire rubbing on the fenders which was all the excuse I needed to go bigger. Next was a set of Fabtech 3.5” spring hangers up front and a block/u-bolt kit in the rear to net around 9” of lift. This allowed the 36” tires to clear without issue and the truck stayed at this height until it was time to replace the tires. Thinking back, it seems every time a new set of tires were needed I took the opportunity to go with a bigger suspension setup.

Once the truck was up in the air, the bumpers were the first thing to be upgraded. I installed Ranch Hand front and rear full replacement bumpers in gloss black. The truck also got some performance upgrades. First was the exhaust in the form of a 4” turbo back 409 stainless steel kit from MBRP. Next was an AFE stage 3 cold air intake and third was a custom tuned flip chip from DP Tuner.

The next stage of this build was to remove the Fabtech springs and go with custom 12” lift springs, Offroad Unlimited (ORU) crossover steering and a new set of Weld 16.5×12 super single wheels wrapped in 39.5” Super Swamper TSLs. The truck had a really nice stance but after wheeling it, I knew I had room for larger tires! The next set of tires were 44” TSLs! At this point there was no other option than to re-gear to 5.13:1 ring and pinion. The truck regained a lot of the power loss and drove very well, especially for a truck on 44” tires. The 44s gave it the ability to really get into some difficult mud bogs without getting stuck very often. The truck became so well known that it actually started to be the “go to” for pulling others out who got stuck. There were not a lot of daily drivers on 44s in the area. 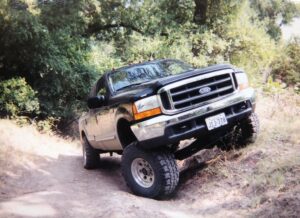 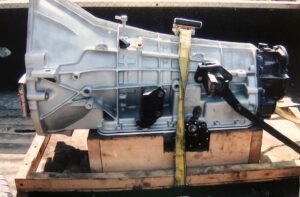 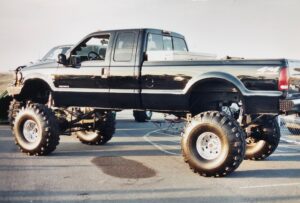 Well, as you can imagine, the time came to replace the 44 inch TSLs. Interco had come out with the Super Swamper Irok in a 49” tall version so I opted to go with a set wrapped on the same 16.5”x12” Weld Super Singles. Can you say sidewall?! It could run over a 6” tall concrete curb and not feel it at all. The 49” tires would just soak up the obstacles. The truck needed more help in the steering department with these tires so a hydraulic ram assist setup from PSC Motorsports was installed. The steering ram made a dramatic improvement in the handling of the truck. It was now possible to turn the tires with one finger on the steering wheel while sitting still in a parking space.

Can I Get An Upgrade?

Eventually the 49” Iroks did need to be replaced but, the next size up would be the 54” Bogger or 54” Mickey Thompson Baja Claw. It was decision time, the truck had already been modified with custom headlights to meet the headlight laws in the state of Texas. If it was lifted any higher with larger tires, the headlights would have to be reconfigured. After four different tire size increases, the truck had finally reached its maximum height. So, what did I do? I went with another set of 49” Iroks. At this stage of the build, I had a lot of data to work from and really started to get the truck dialed in. The 49” tires worked well but the 5.13 gear ratio just was not quite enough. This was apparent when driving on the highway at 70 MPH, the truck would run 1,000 degree exhaust gas temperature (EGT). To put this in perspective, the same truck in stock form, towing a 30’ gooseneck trailer loaded with heavy equipment would run similar EGTs. In addition to this, the truck had gone through three rebuilt transmissions by this point and I knew it was time for a big upgrade. 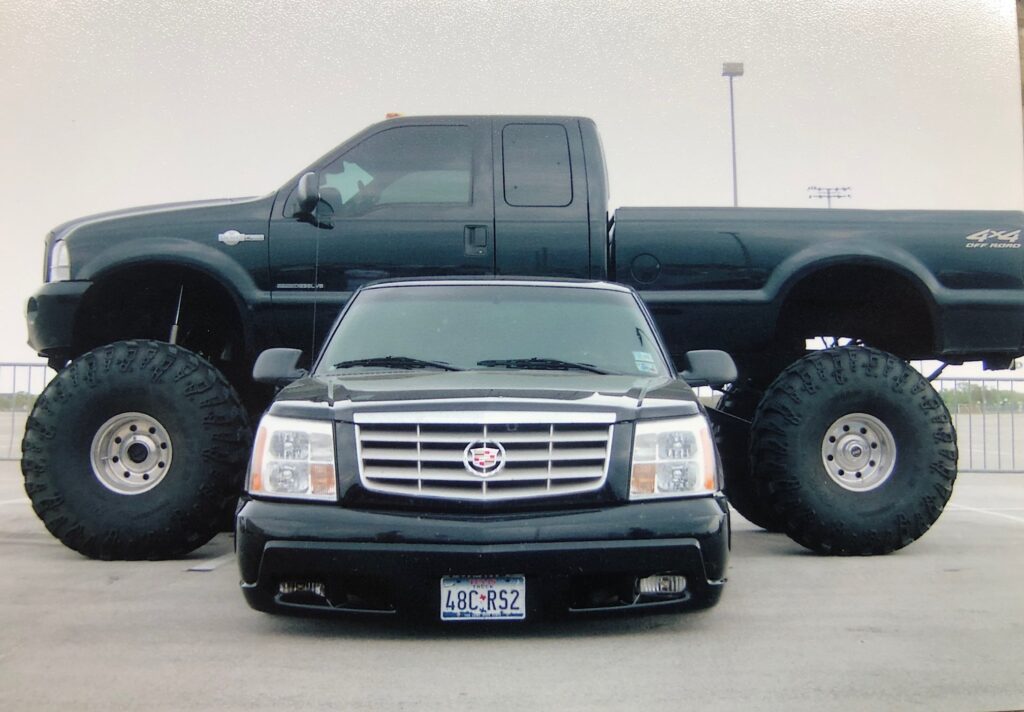 The Next Big Thing

The next stage of this build was a big one. A fully built 4R100 transmission from Brian’s Truck Shop (BTS) with a Precision billet aluminum torque converter. To complement this new transmission, a complete 2.5 Ton Rockwell Military Axle conversion was done. The Rockwell Axles come with a 6.72:1 gear ratio which was great for the 49” tires the truck was running. This axle conversion was a little challenging, but I worked through it. For example, the truck uses an ABS ring in the rear axle with a sensor that tells the PCM how fast it is moving so it knows when to shift gears in the automatic transmission. No more Ford OEM rear axle in the truck meant there was no Ford ABS ring or sensor to indicate speed to the PCM for the transmission to shift gears. Other things like Ackermann steering geometry, drum to disc brake conversion and wheel bolt pattern also added to the difficulty of the conversion. After doing all of this, the EGTs drop from the previous 1,000 degrees at 70 MPH to only 600 degrees which is more like a stock truck on 32” tires. In other words, the 7.3 PSD has no idea it’s pushing 49” tall tires!

Eventually I swapped over to 395/85R20 Goodyear tires since they are radial and have better road manners than biased ply tires. The truck is now on a set of the same size tires but made by Michelin. For off-road use, it is hard to beat the 49” Iroks I previously ran but the radial tires are more practical for what the truck is used for now. Muddin’ has now been street legal on 2.5 Ton Rockwell axles for over 11 years. It has very good driving manners considering the size and is a lot of fun to wheel / drive. Who knows what the next stage of this build will be but I have a feeling it will be a full 4-link conversion with coilovers!